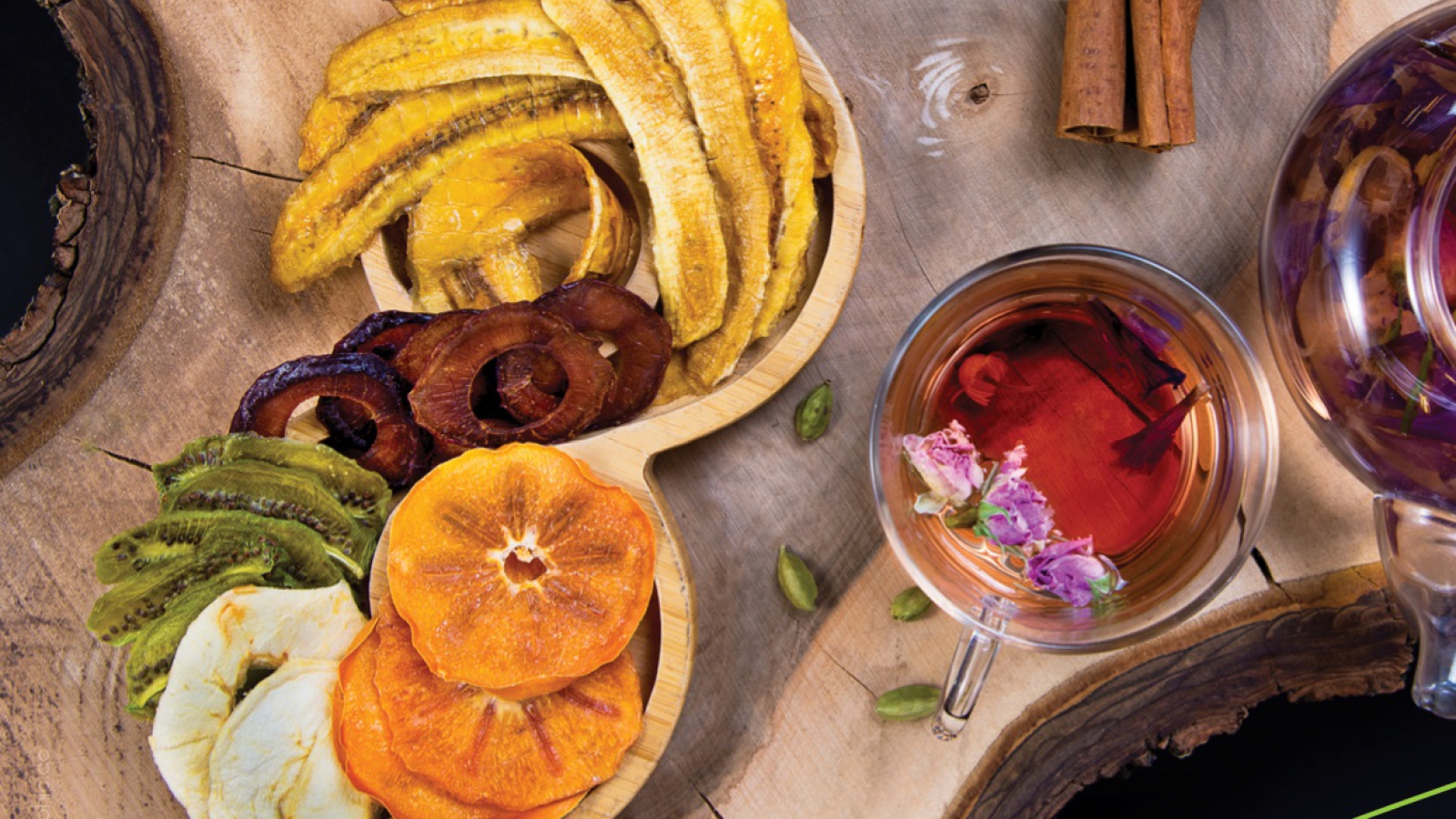 Nuts and dry fruits benefits may help to improve our health and to prevent some diseases when included regularly in eating habits. Because of their interesting nutritional profile, some studies have evaluated the impact that nuts have on health and have observed an inverse association between the frequency of nut consumption and cardiovascular disease (CVD), type 2 diabetes and body weight.

In addition, traditional dried fruits also provide essential nutrients, such as fiber and potassium, and a wide range of phytochemicals that have been related to health promotion and antioxidant capacity. Both nuts and dried fruits can be consumed as a snack, on top of cereal, in yogurt, salads and pasta, and can provide us with some important health benefits.

The benefits of nuts in relation to CVD  have been widely supported by both epidemiological and clinical trials.

Scientific studies have clearly demonstrated that nut consumption has a cholesterol-lowering effect in the context of a healthy diet. CVD is the number one cause of death in the world. According to the International Society of Hypertension (ISH), high blood pressure (hypertension) is the major risk factor for cardiovascular disease and its prevalence is expected to increase considerably in the coming years. In fact, hypertension is expected to increase to 1.56 billion people worldwide by 2025. Nuts are low in sodium, which has been related to a lower risk of hypertension in some studies. In a 2009 scientific paper, researchers observed that nut consumption was associated with a lower risk of hypertension.

A study published in 2015 observed that tree nut intake was associated with a decrease in total cholesterol, LDL, “bad,” cholesterol and triglycerides. It also asserted that nut consumption in general, rather than just a specific type, was the major reason for the decrease. A new systematic review and meta-analysis of 18 high quality clinical studies, published in 2016, also reported that almond consumption reduces both total and bad (LDL and non-HDL) cholesterol levels. According to another study, walnuts may improve endothelial function, decrease both oxidative stress and some markers of inflammation, and increase cholesterol efflux.

There have been some scientific studies on dried fruits and cardiometabolic risk factors suggesting that they can help lower the postprandial insulin response, modulate sugar absorption, promote satiety and have a beneficial effect on blood pressure. In a study published in 2009, researchers observed that simply replacing one unhealthy snack per day with fruits, dried fruits or unsalted nuts was associated with lower cardiovascular risk, which may prevent approximately 6,000 cases of CVD per year in the UK.

Nuts not only offer nutritional benefits, but may help to control body weight. This is especially important as obesity rates continue to rise across developed nations. 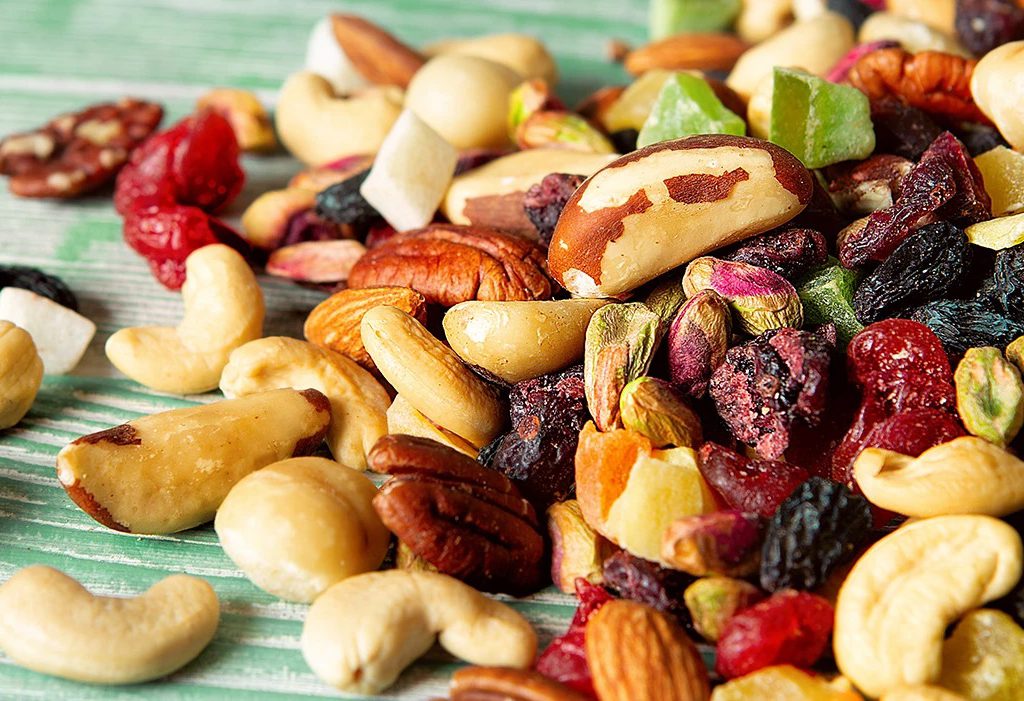 Benefits of nuts may also help reduce the risk of diabetes. The number of people with diabetes has risen from 108 million in 1980 to 422 million in 2014, becoming a serious public health problem. A number of studies have investigated the effect of nut consumption on diabetes risk. In particular, a 2011 PREDIMED study observed a 52% reduction in diabetes incidence in two experimental groups supplemented with olive oil or 30 g (1 oz) of nuts (a mix of walnuts, almonds and hazelnuts) per day, compared with the control group.

Research suggests that dried fruit consumption is also good for people who have diabetes. A study by Louisville Metabolic and Atherosclerotic Research Center observed that consuming raisins as an alternative to processed snacks resulted in a significant 23% reduction in postprandial glucose levels.

Dried fruits are well-known sources of dietary fiber, which has a direct effect on gastrointestinal function. In 2013, prunes were granted a specific EU health claim for their contribution to digestive health. The permitted health claim reads: “Dried plums/prunes contribute to normal bowel function”. Eating 100 g of prunes (3.5 oz, 8-12 pieces) daily promotes good digestive health and provides more than 19% of the daily recommended intake of fiber. There is also scientific evidence that suggests that prunes may improve stool frequency and consistency in cases of constipation.

Osteoporosis is a debilitating disorder that affects both men and women. Aside from existing drug therapies, certain lifestyle and nutritional factors are known to reduce the risk of osteoporosis. Among nutritional factors, recent observations suggest that prunes may be helpful in both preventing and reversing bone loss. In addition, a 2011 study suggests that prunes may improve the bone mineral density in postmenopausal women.

Did you know about the benefits of nuts and dried fruits? Do you include them within your regular eating habits?