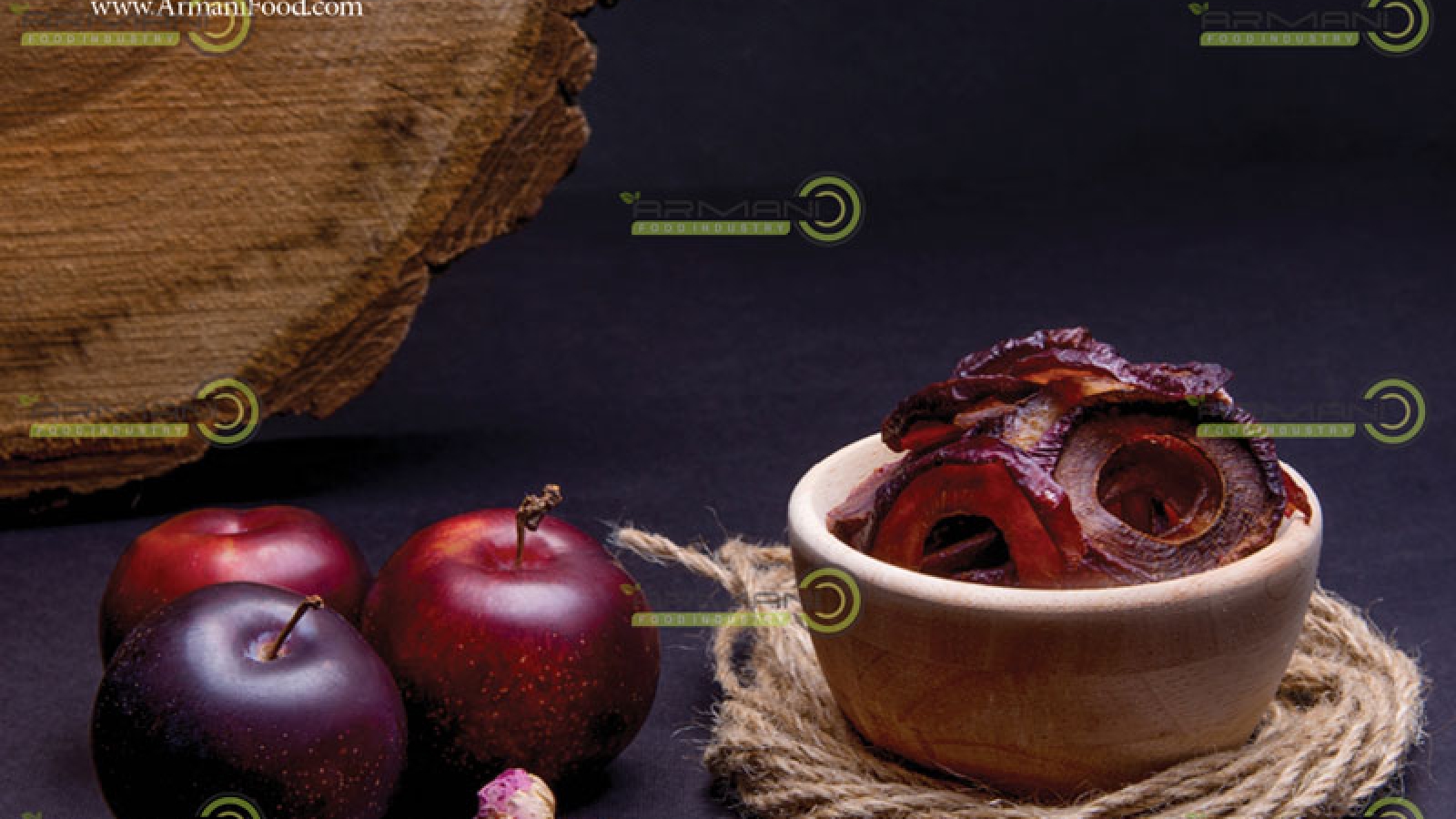 Plum is one of the six families of the genus Prunus which is cultivated on four species of tree plants and shrubs in Iran that have both food and ornamental use. Plum is one of the oldest summer fruits that can be found in nature with various colors (from light yellow to dark purple). This fruit is full of useful vitamins and antioxidants that are very useful for the health of the body and are effective in preventing various diseases. Vitamins K and C, as well as potassium, manganese and copper, are found in abundance in plums, which enhances its nutritional value.

In general, plums can be divided into two categories: European plums and Japanese plums. Common plums in Iran are generally from the Japanese plum category. Japanese plums are single-core and round, and in terms of color, shape and size, there are different varieties such as yellow plum (gold drop), plum, red plum and black plum, But European plums are visually elongated And have different varieties such as California, Gracilis and Maritima.

European plums are also seen in the same colors mentioned and are sweeter and have less sourness, which are called plums in Iran. French plum and Mexican plum are two completely different types of plum. French plum is green, has a raisin-like appearance and a honey-like taste. Mexican plum also has a round and red fruit, but it is very sweet. Both general categories of plums are eaten either plain (fruit and dried) or stewed. 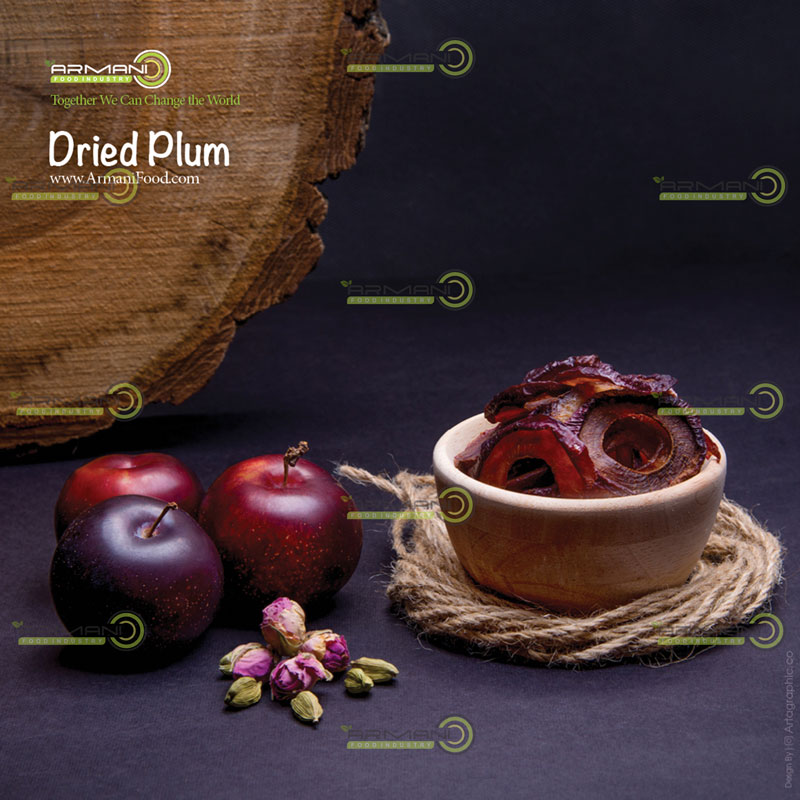 This type of plum has anti-inflammatory benefits and also helps to improve short-term memory function. Due to the presence of phenols, especially anthocyanins, it helps to improve the health of the bones and prevents premature osteoporosis. It also improves heart function and slows the formation of diseases such as clogged arteries. Due to its high fiber content, this fruit cleanses the intestines and prevents intestinal diseases, especially colon cancer.

This product has a very high nutritional value because it is rich in vitamin A and some types of B vitamins, and also during its drying, the percentage of potassium, copper and manganese increases in proportion to its volume and weight.

Its benefits include helping to treat constipation, lowering blood sugar and better heart function, which in this case is common with other plums, But consuming more than five or six plums and the same weight of prunes can cause problems such as diarrhea or impair blood sugar levels.

Why do we dry plums?

Plum has many benefits and eating it is good for health, and it is also delicious in terms of taste and is used in some traditional Iranian dishes, But due to the bio-genetic reasons of this fruit, which causes the period of fruit ripening to spoilage, as well as its fresh season, it is a very short time, for this reason, from ancient times, they dried it so that they could consume it all year round, or add it as a flavoring to food, or use it along with dried fruit. Dried plums have even been used alone. 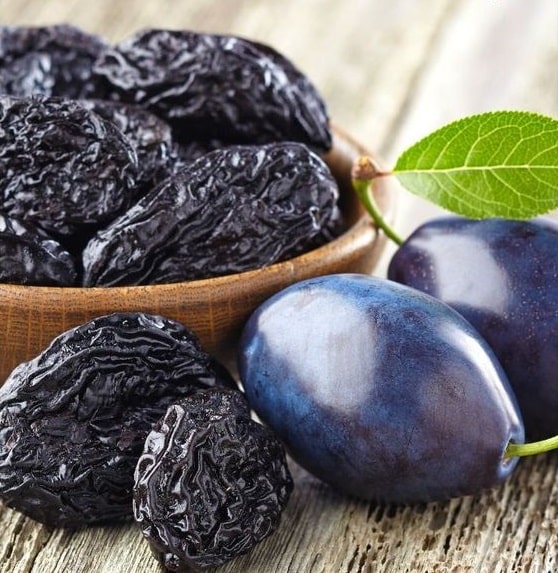 The most common models of drying plums

Drying in the oven

In this method, first wash the plums and then cut them in half to remove the core. Then cut the plums into equal diameters, then place the slices on a metal lattice oven at suitable distances. Place a tray under the metal lattice ovento pour the water from the fruit and evaporate. Set the oven temperature between 175 and 200 degrees and check them every two hours to turn off the oven if the surface dries, this method usually takes 8 hours in the oven.

After washing and cutting the dried fruit laterally, removing the core and slicing the plums, spread it on the surface of the tray, cover the tray with a cloth net so that the fruits are not accessible to insects. Then expose it to sunlight and open air to dry. At night, in order not to dew, we return the tray inside the house, depending on the humidity and temperature, the drying process can be shortened or lengthened, when one side is completely dry, we turn the slides upside down and repeat the operation.

In this method, it is better to use large plums, after the usual steps of washing, removing the core and slicing, we put them on a fixed container, then we collect some sulfur under the chamber and burn it to make the plums semi-dry and smoked using the heat and smoke that is created. After half an hour, put the plums on a tray and put them in direct sunlight to dry for a while. In this method, the extract in plums remains in it and will have a clear color and a more beautiful appearance.

The simplest way to dry a plum is to dry it with salt and heat. In this method, which works better in summer, we also do the same in the initial stages as above (washing, peeling and slicing). Then place the slices on a flat surface and pour salt on them to make them more palatable and to make the plums profitable to prevent them from spoiling immediately. They can be placed in the sun, outdoors or on a heater, boiler, etc. to dry and consume faster.

Differences between types of dried plums

The physical differences between the different types of prunes are very small, and the biggest difference is in the taste, because drying is the process of separating water from the fruit, And plums undergo chemical changes as they lose water m And changes in the amount of vitamins in the volume are determined.

Most of these changes make the dried fruit taste sweeter or sour, Because the amount of fructose (fruit sugar) in its compounds evaporates with fruit extract in different proportions. If the fruit loses more sugar during the drying process, it becomes a little more sour, and if a little sugar comes out, it becomes sweet, which will vary according to different methods.

Dried plums do not have a different temperament from fresh plums in terms of traditional medicine. Both plums are cold in temperament, so it is very useful for people with hot and dry temperaments.

For people with a cold temper, it is also recommended to consume this fruit either dried or fresh with honey. Under no circumstances should plums or similar fruits be excluded from the diet. Because we limit the body’s use of substances and its benefits. It may be thought that the sugar in them causes weight gain, but a proper and healthy diet never restricts the consumption of fruits and vegetables.